I have deduced the only two reasons why someone does not like sushi. One if they think sushi contains raw fish, or two, they have never tried it before.

There cannot be any other reason because sushi is that damn good!

I can still remember the first time I tried it when I was six-years old at a Sushi Train in Perth. My family and I road tripped to Western Australia to visit my god father and his family. Although we were so young, we still remember the time it changed our taste buds forever.

From that point forward my brother was obsessed with sushi. So it goes without saying that I have to owe my sushi making skills to him.

Quite some Christmases ago, my Nanna bought Callan (brother) a sushi kit that came with a DVD. I watched this master sushi chef teach us the tricks of the trade that would soon have people envying our sushi-making skills forever.

After my brother showed me the art to the roll, and the skill to the slice, I had it down pat. Now I make it as easily as if I were making a salad roll.

Once my girlfriends and I came home after one too many drinks and a night on the town and I made a bunch of rolls at the early hours of the morning. Other times I have made it as a hangover feed as apposed to greasy hot chips or some other salty craving. 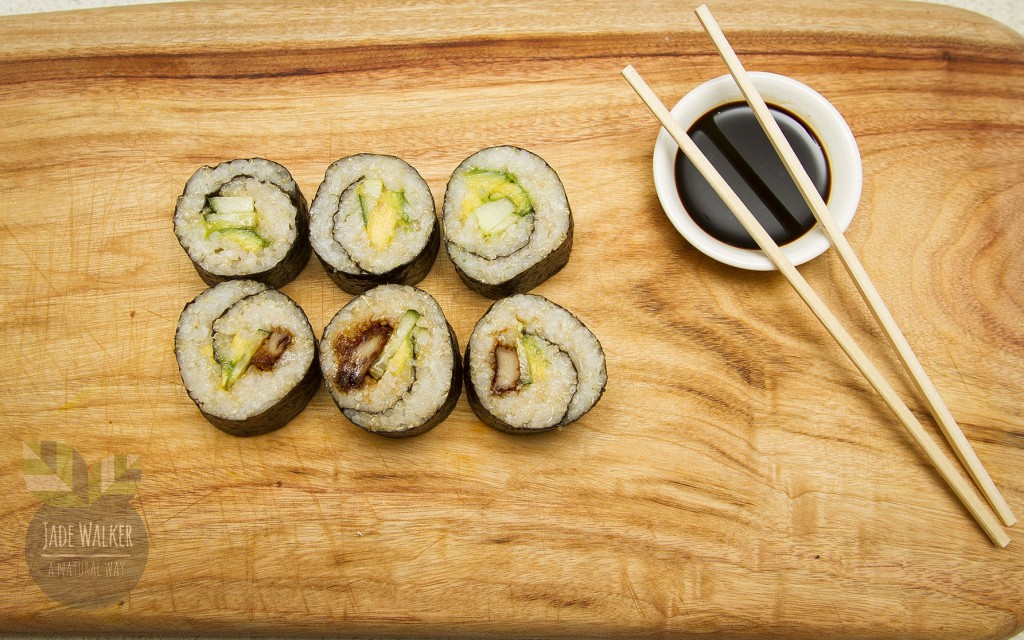 I have come up with an array of variations of the favourite Japanese food an my current favourite is quinoa sushi. I have made it with quinoa alone or a mix of quinoa and rice. A mixture certainly holds better and still gives that pleasing mouthful that we all crave. Quinoa (pronounced keen-wah) is renowned for being a high source of plant-based protein. It is a complete protein meaning it contains all the essential amino acids needed for the human body. This superfood is also a source of fibre, magnesium, iron and calcium.

When it comes to seasoning the rice and quinoa, you can make things easier by buying your own sushi rice vinegar. However it is just as easier, and a lot cheaper to make your own. It is just a mix of vinegar, sugar, and salt, but I like to use coconut palm sugar for a lower GI sugar alternative, and apple cider vinegar instead of rice vinegar for extra health benefits. 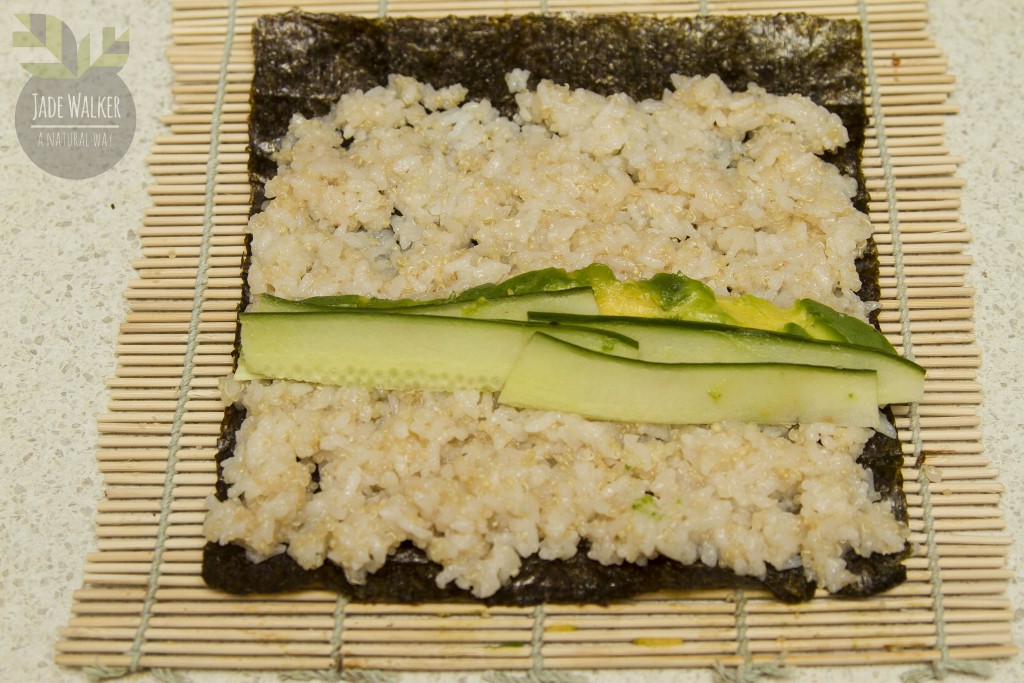 1. Have several sushi mats on hand, preferably one for each roll. This keeps each roll firmly in tact while in the fridge. If you only have one or two mats, wrap the sushi tight in cling wrap  after rolling, twist at both ends, and then place in fridge.

2. Keep a bowl of water with a tablespoon of added vinegar beside your working space. Dip your hands in the bowl every time you go to pick up some rice to reduce the amount of stickiness on your fingers.

3. Do not squash down rice on the paper. Instead lightly place small chunks of the rice until covered. If you squash it, your sushi will become too dense and gluggy.

4. When rolling, tuck the top over tightly, then pull the bamboo mat away from you, roll in again, pull away, repeat until all rolled up. It helps if you keep the sushi paper lined up with the bamboo mat facing you.

5. When it comes to cutting, dip the tip of your sharpest knife in the bowl of water and vinegar. Then stand knife up right so the bead of water drips down the knife edge. This helps the knife glide through the sushi to avoid tearing.

6. Use swift gliding strokes from the back of the knife to the tip. Always cut down the middle first, then place one half in front of the other, then cut those into three.